As any Producer recognizes early in their career, you must choose who you hire very carefully. I learned how important it was to put together crews who could not only function together, but thrive and enjoy the work. As an old AD, I had suffered all I wanted on sets where people mostly just yelled at each other. I knew I would not let that happen when I could hire crew.

The wise, old Director taught me– “Casting is 90% of my job. I get that right, the rest is easy.”  He was right. As Producers, we are after the same thing. If we assemble the proper group of technicians and artists, give them a script and set the goal, the rest is just day to day management.

Directors, as our producing partners (all Directors are de facto Producers) expect their Producer to assemble the best group available. They want to be involved in all key hires: Cinematographer, Production Designer, and Assistant Directors of course, but quickly get overwhelmed with the show.

It is left to the Producer to hire those most excellent Department heads that will execute the show. Critical in the early hiring are the Production Accountant and the Production Office Coordinator. Step very carefully here. The Accountant is your friend, confessor and gatekeeper to the studio. Coming up in the business, pay attention to the money tracking and get to know the accountants. And just as a good AD can keep a weary Director on track, a good POC will keep their Producer connected and informed and in charge.

Keeping your boss in charge is simply making sure decisions that get made, were made by someone in charge.  You would not believe how many decisions get made not only without the Producer’s or Director’s input, but no input at all. To make things right usually costs time and money and sometimes, it can’t be fixed. Getting that right POC is critical to starting the process off right. Starting and keeping lines of communication going make the difference between a production office and a well run production office.

Once the office is settled then hire the Director’s tripod–

From those three will spring most of the rest of your prep & shoot crew. From that group, the Director can successfully execute their show.

For the Producer, another key hire is the Costume Designer. Much of their work is in prep and the ongoing prep of a series can be extremely demanding. More on that diverse and quiet department in the prep blog to come.

The key is to make sure the office and crew has a good vibe by hiring people who are pros and who will get along. If you’re familiar with the crew base, you are in good shape. If not, the key crew you hire first will have recommendations for other depts. Listen carefully. If you believe in them, then believe in the rec.

Early on in the process, it will be evident if everyone can’t play nice together. As the crew begins to work together, people who are going to bump up against each other will usually be coming into your office separately, to complain about the other. Sometimes it’s hard to sort out, but you will have to get everybody to play nice or you’ll need to make a change. Getting along, looking out for each other, realizing there are many departments, but one show. We are here for one reason– to succeed– to do our best work and make the shoot day.

The modern film professional is a highly motivated worker who is also a freelancer. Living off their reputations, the film worker will always try to connect and work side by side with fellow technicians and artists. Many times during their career they are thrown in with new groups of people.

But that is also the rub. We work very closely and intensely during these long shoots. It is a business of personalities and not all the artists are in front of the camera. We all know artists can be temperamental, but the actors are only part of the drama behind the scenes.

No cast member is getting fired (in general– future war stories coming) instead of them.

That if you’re a grip, or a costumer, or a driver, that you not only serve the Director and the project but your Dept. Head. They won’t be leaving the project before you.

So sometimes changes have to be made in the crew. It might be one of your hard working department heads, it might be a crew member down the pecking order, but the Producer will need to make that change. Sometimes it goes easier than other times, but once made, the difference is impressive.

I have always insisted that everybody play nice. Mistakes get made, calls are missed and things don’t go the way we planned. If harsh words were exchanged, then shake hands or kiss and make up. The Producer can let nothing fester. It will infect the crew and if you wait too long, the change may not help. Pay attention and take responsibility for your crew.

I have had the good fortune of putting together some superior crews all over the country, including the gang in Chicago currently shooting Chicago Fire for Dick Wolf.  In New York in 2000, I hired a crew that was an excellent group. It took a few changes in the early going, but that core crew is still working together on a show today. Producers crave crews like this because they make it look easy. And I think I know why– 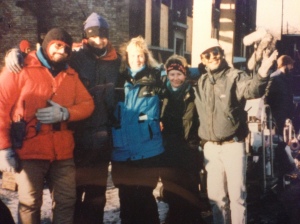 One thought on “Casting the Crew…”