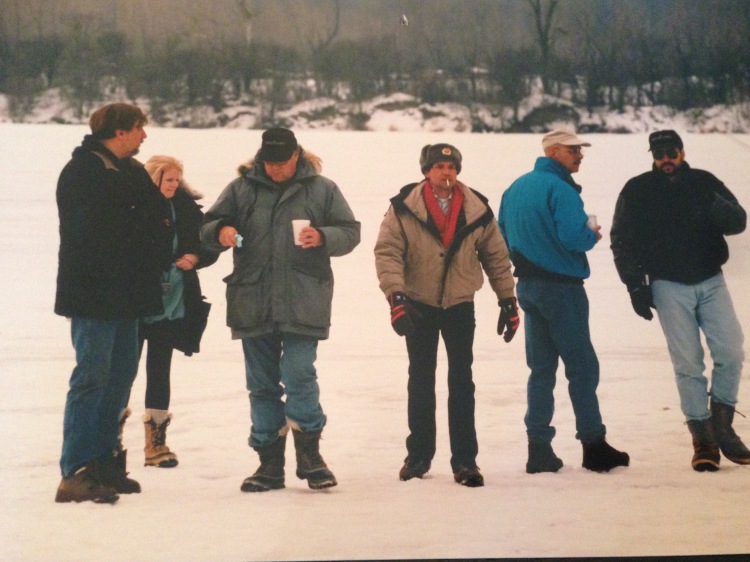 On the ice just before nightfall, still high and dry…
That’s Alicia Accardo, script supervisor and Art Seidel, our lovely UPM, with Director Vern Gillum, DP Robert Hudecek and me. Totally forgot who the guy on the left was.

When you shoot in Chicago winters, you do have to accept that you will be shooting outside and you will be cold. But being Chicago, even stranger things can happen when you are shooting on a frozen lake. And as we discovered on the Untouchables TV series, it usually did…

So, in the middle of winter we get a script for an episode that we might actually be able to accomplish (not always the case–see below). The story includes a meeting at the Canadian border on a frozen lake of the gangsters and bootleggers. They’ll pull up in cars, meet and get  interrupted by the arrival of the Untouchables and shoot it out.

We will need 12” of solid ice, frozen hard over the winter, to drive cars on –especially the period ones we have that run 4-6 thousand pounds each.

Hey, it’s Chicago. It had been a terribly cold winter and at the Forest Preserves, which we used many times to film our period show, the shallow lake was frozen solid. We had it cored by the Key Grip and confirmed almost 14”of ice. The Park Rangers concurred and let us have our permit.

Of course it’s a night scene, so we are out there at 2 am trying to bring cars on the ice to get a line up for the master shot.

As the 1st AD, I had been tracking the weather in the last few days and it being Chicago, we had had a short streak of unusually warm weather (for Chicago, that is) for a few days before we shot. But the night of the shoot, it will be cold.

The air temp was falling as we brought the cars on the ice. The Gaffer had taken the precaution of using DC current and had raised all cable and lights above the lake surface.

Now I’ve got about 3 of the 7 cars positioned and as my 2nd AD and I are talking, I realize I am standing in about 3” of water. That’s odd. I was just standing on solid ice. Norm and I continue bringing the next car in. The operator is setting the shot with us and the 2nd AC is marking the cars. His marks are starting to float away. WTF???

All 7 cars are on the ice and we are now standing in 6” of water.

At the same time, I come to the realization that the weight of the cars has actually pancaked the entire frozen lake down deeper into the marsh. The area we are on is actually a marsh 3’ deep and while the lake is big enough for the shot, I can see the whole shoreline from my now watery stance. I come to the conclusion that the earlier warm weather had loosened the edge of the ice and the entire ice layer of the lake was flexing down with the weight of the cars.

Whoa. Backing all the cars off (we had a ramp to move them on & off the lake), the lake rises right up and the water drains back below the ice.

Remember, I’m just the 1st AD in this scenario. In this modern era, I know the company would immediately wrap and get off the ice. As a Producer, I would not hesitate to wrap and leave without the scene. But in those days of the early 90’s, Producers were rarely on set. They were not expected to be. I could have called the Producer or the UPM just to hear them say try to get it shot, but our one “brick” cell phone wasn’t working anyway.

And our job was to get the work.

I consulted our Ace Cinematographer, Bobby Hudecek. I had worked with Bob for many years and he is one of the smartest filmmakers I know. We decided we’d give it one chance, get as many shots as we could in that one setup. There was no danger from the electric, the ice was solid, just flexing.  We deemed it safe for an attempt. Sending everyone off the ice who was not essential, we shot.

If you see the scene it looks like one of the strangest things. As the stuntmen slide the cars to their marks, they kick up a water spray like a boat. The Untouchables, as they leap out and run toward the gangsters firing their guns—are slogging through the water like an army crossing a river. The water is spraying up into the backlight making the whole thing seem misty and eerie. The good guys shoot their guns, the bad guys shoot back, slog through the water to jump in their cars and pull away with watery fishtails. And as they drive away, you can see the water receding. Truly, a bizarre sight.

We faked the couple of close ups we needed back on shore and left that strange set at dawn.

For those of us who worked on The Untouchables, the experience was uneven. While we filmed and aired 44 episodes, only about 6 were really good(and they were very good), a few not so bad and truly many were just strange and confusing. The odd thing was, we were in Chicago and using the locations to the advantage of the show. When we filmed Al Capone in a courtroom, we filmed at Cook County Courthouse in the actual courtroom Capone was first sentenced in. When Capone returned to Union Station in Chicago, we filmed there. That handful of great episodes could not save the series, but we were proud of them.

In our second season, we actually got a script for an episode that opened with – ‘A U-boat surfaces in the mist off Montauk’.  Really sort of puts a damper on reading further… Montauk—that would be the far end of Long Island—New York. We aren’t exactly close here on the shores of Lake Michigan. But, our great location department somehow pulled off getting permission to film on U-55, the captured German U-boat at the Museum of Science and Industry right off Lake Shore Drive. We were able to fit 3 actors, a steadicam and director in those tight quarters and managed to get some pretty cool shots there to set up the story. Things kind of fell off once we got off the sub.

I do think those writers were given an impossible task many weeks, but we did do the best we could with the shows in production.

We did our job and got the crazy, slushy scene that night. But, I learned yet another lesson for when I would call the shots. Even with good planning, things you cannot conceive will go wrong. You must be ready to react when Murphy appears.

And –stay off frozen lakes…

As the light fades, Vern, Bob and I discuss the lake.